When Santa Fe’s Loretto Chapel was completed in 1878, there was no way to get to the 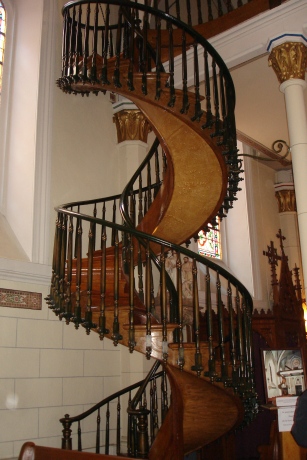 choir loft, some 22 feet above, except by climbing a ladder. For the Sisters of Loretto Academy that was unthinkable.

In those day, it was most unbecoming for a woman to climb a ladder, but having stains built would take up too much of the space of the small chapel. Without a staircase to the loft, the chapel’s use was severely limited.

The Sisters of Loretta Academy prayed for help.

One day, a stranger appeared and agreed to build a stairway they could use. It took him six months. When he finished, the Sisters found a matchless spiral staircase that made two 360-degree turns. It had exactly 33 stairs and stood with no visible means of support.

But the builder had left without payment. The Sisters sought him at the only boarding house in town. No one claimed to have ever seen him. They went to the lumber yard to pay for materials, but none had been purchased.

Years later, when the spruce-like wood was analyzed, no one could identify where it came from. And so it was simply called Loretto spruce, the only such wood in all the world. Even later, the spruce was identified with similar trees in Alaska, but no one knew of anyone or at any time a tree had been cut and shipped to New Mexico.

Who was the builder of this unusual staircase? Was it old Joe, the itinerant carpenter with a genius for engineering, or  … as the Sisters believed … Saint Joseph come to answer their prayers?